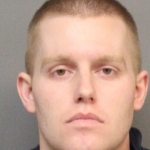 The 24 year old Denver suspect in the robbery of the HyVee Pharmacy near 70th and Pioneers is arrested by Lincoln Police as rescue workers respond to a 911 overdose call this morning.

Officer Luke Bonkiewicz says that Corey Jacox, who was in Lincoln visiting relatives, is suspected of passing the pharmacist a note over the lunch hour Wednesday, demanding narcotics and claiming he was armed.

Lincoln Fire and Rescue and Police were called to a home near 63rd and Yankee Hill Road after a call that  Jacox had overdosed on drugs.