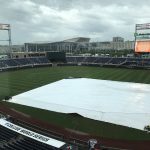 Another day, another delay.

By 9:30 a.m. Wednesday, the College World Series was again paused due to weather.

Texas Tech and Arkansas, after being rescheduled twice finally got underway at 2:30, but since the first game of the series on June 16, fans and competitors have been subject to three weather delays and two postponements.

Dan Morrissey has been the director of marketing and events for the CWS since 1989. He can’t remember a series of events quite like this year’s.

“It’s a very unusual year,” he said. “I’ve been doing this for 29 years, and this is the first consistently bad weather situation that I can remember.”

The scorching heat last weekend, and the persistent showers this week, have contributed to a noticeable drop in attendance at T.D. Ameritrade Park.

CWS media coordinator J.D. Martinez is working his 15th CWS. He, much like Morrissey, can’t recall the weather playing such a huge factor.

“The numbers, they don’t lie,” Martinez said. “The numbers are down, because people don’t know exactly if the game will be played or not played, which is very disappointing, because everyone is here to watch great baseball.”

Hamilton and Morrissey have both encountered fans around Omaha this week who have been very patient and willing to ride the storm out.

Deborah Ward, the vice president or marketing and communications for Visit Omaha, said baseball fans have no shortage of other activities to fill their time not spent at the ballpark – mentioning the world famous Henry Doorly Zoo and brand new Capitol District which just opened this past spring at 10th and Capitol.

“(Rain delays) gives us an opportunity to have (fans) get out and exlpore the city,” Ward said. “The Omaha Visitors’ Center is right down there in the middle of the action at 10th and Farnam. Our volunteers are happy to help any fans who are in the city and direct them toward fun things to do.”

Some of those activities may have to be indoors. More rain is in the forecast for Thursday, Saturday along with next Monday and Tuesday.

While this year’s College World Series may not break 2017’s attendance record (357,646), the most patient fans who traveled to Omaha to see quality baseball will stick around – either until their team is eliminated or until the trophy is hoisted on the final night.

“Baseball is that one sport that you have delays since when you start tee ball all the way through,” Hamilton said. “I know when you get to the national championship and the College World Series, you hope to have baseball games everyday and so do we.”