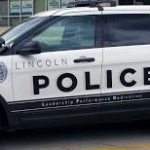 Lincoln Police are looking for the suspect who held up the HyVee pharmacy at 70th and Pioneers over the lunch hour. Officer Angela Sands tells KLIN News that the suspect slipped a note to the pharmacist demanding medication. Sands says that he didn’t display a weapon but the note claimed he was with other individuals who are armed.

Officer Sands says the suspect is described as a white male, wearing black glasses with a black baseball cap. Sands says they are pulling video out at this time that has a pretty good picture of him.