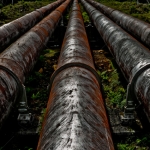 LINCOLN, Neb. (AP) – The developer of the Keystone XL pipeline is showering Nebraska public officials with campaign cash as it fights for regulatory approval in a state that is one of the last lines of resistance for the $8 billion project.
A review by the Associated Press finds that a political action committee for TransCanada Inc. has donated more than $65,000 to campaigns within the last year, mostly to Republican state lawmakers, the Nebraska GOP and Gov. Pete Ricketts.
Pipeline opponents say the company’s contributions show that it’s trying to exert influence over the state’s top elected officials at the expense of landowners who don’t want the pipeline running through their property.
TransCanada spokesman Matthew John says the company is supporting officials who promote the safe development of North American energy.