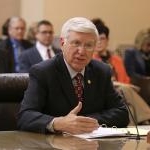 “It’s not a matter of if but when there is another school bus accident happens”…and a state senator wants to keep children as safe as possible by requiring seat belts in school buses.

Senator Robert Hilkemann tells KLIN News that seatbelts save lives. He adds the requirement is supported by Nebraskans he has visited with.

Hilkeman hopes a federal transportation panel recommendation will encourage more state senators to support his legislative proposal to require seat belts in new school buses. His similar proposals in the past have not been successful.

The National Transportation Safety Board recommends that all new large school buses be equipped with both lap and shoulder seat belts.