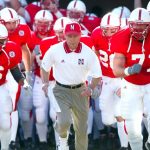 According to a news release, the Tom Osborne Legacy Award is presented by the FWAA and Rotary International to a person for making extraordinary contributions to the Outland Trophy and to interior line play in college football and for exhibiting the characteristics of integrity, sportsmanship and fair play.

Current Nebraska coach Scott Frost, who’s also expected to be on hand for the presentation, had said several times during the spring that he believed it’d be a good idea to bring Solich back and thank him for his contributions to the program.

“I think a lot of Frank Solich, he’s one of my mentors,” Frost said in March. “Frank averaged over nine wins a year here, and it wasn’t good enough. Then, (Nebraska) got rid of him and went through a tough period.”

Solich was 9-3 in 2003, but was fired by then-athletic director Steve Pederson.

A native of Johnstown, Pennsylvania, Solich was an All-Big Eight fullback at Nebraska from 1963-65 under legendary head coach Bob Devaney. After a successful high school coaching career at Lincoln Southeast, Solich became an assistant under Osborne in 1979.

During nine of the 15 seasons Solich was the NU running backs coach, the Huskers led the nation in rushing.

The 73-year-old Solich, who’s been Ohio’s head coach since 2005, has guided that program to the Mid-American Conference title game four times and to nine bowl games as well.