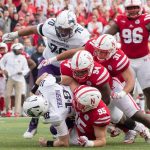 The Nebraska Football team will be a large underdog in some key conference games this year, according to one Vegas oddsmaker.

The South Point Casino released odds for some of the biggest college football games of the year on Thursday including odds for three Husker games.

Nebraska plays at Wisconsin on October 6. The Badgers open as 17-point favorites.

The Huskers have yet to win in Madison since joining the Big Ten. Wisconsin scored 21 unanswered points in the second half to beat Nebraska 38-17 in Lincoln last season.

The following week, Nebraska will travel to Evanston, IL to take on Northwestern. The Wildcats open as a six-point favorite there.

Northwestern topped the Big Red 31-24 in overtime in Lincoln this past year.

Nebraska’s regular season-finale will be at Kinnick Stadium in Iowa City for the annual Heroes Game against the Hawkeyes. As of now, Iowa is an eight-point favorite.

Iowa has beaten Nebraska four times in the last five years. ESPN’s FPI currently predicts that Nebraska will win 5.5 games in 2018. The Huskers officially kick off against Akron at Memorial Stadium 100 days from Thursday.

Earlier this week, Nebraska opened as an early favorite against the Zips, according to VegasInsider.com.