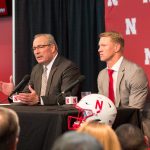 Nebraska athletic director Bill Moos confirmed on the Husker Sports Network’s Sports Nightly on Monday evening that the Nebraska Football team will in fact play on Black Friday in 2020 and 2021.

Last fall, it was announced that Nebraska would end the ‘20 and ‘21 seasons by playing Minnesota on the Saturday after Thanksgiving. The Huskers will still play the Gophers, but both games will be on Black Friday and the Iowa rivalry will be restored in 2022.

“That will be scheduled long after I’m gone,” Moos said. “And I mean from the face of the Earth. But, we couldn’t get the Minnesota thing turned around. So, we will in 2020 and ’21 play on (Black) Friday, but it’ll be Minnesota which is fine.”

The Huskers have played on Black Friday every year since 1990.

Another potential tradition change that’s been recently discussed is the tunnel walk music.

Since 1994, the Tunnel Walk has always been set to Sirius by the Alan Parsons Project. During April’s spring game, Gary Clark Jr.’s cover of the Beatles’ hit song “Come Together” was the soundtrack of choice.

No final decision has been made, but Moos says he’s interested in keeping the Tunnel Walk the same as it’s always been.

“I mean, I like to color outside the lines at times, but at the end of the day, I go with tradition,” Moos said. “Especially at a storied place like Nebraska.”

While Nebraska is a school of tradition, there have been some changes in the athletic department under Moos. On May 16, it was announced that men’s golf head coach Bill Spangler and men’s tennis head coach Kerry McDermott will not return following the expiration of their contracts at the end of June.

“We haven’t had a lot of success lately,” Moos said. “(I thought) it might be time to make a change there. With the resources we have at Nebraska, we should be in a position to compete for championships, and I know we can.”

One person that’s staying put in Husker athletics is head baseball coach Darin Erstad, who just finished his seventh and worst season by win percentage in 2018.

Last year, Erstad was named Big Ten Coach of the Year and helped the Huskers secure their first regular-season conference title since 2005.

“If Darin had struggled for five years in a row, that’d be one thing,” Moos said. “People have short memories. We won the Big Ten regular season championship last season, and that’s not easy, so I’m cutting him some slack. I really feel that he’ll get everything back on track.”

Erstad carries a 58.3 winning percentage, but is just 1-11 in Big Ten Tournament and NCAA tournament games in the last three seasons.

Moos also commented on the future of men’s basketball coach Tim Miles, who was granted a one-year contract extension in April. The extension keeps Miles under contract through the 2020-21 season.

“I wanted to give Tim a chance to hopefully build something that has stability to it and a consistency in regards to win-loss record and also getting into the postseason.”

Miles is 97-97 through six season with just one NCAA Tournament appearance in 2014.