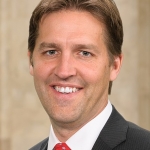 Senator Sasse, who is a member of Senate Armed Services Committee, says that Americans need to understand that the wars of the future will involve Russia investing significant resources to create propaganda and disinformation.

Sasse says the fog of war will not be limited to our situation rooms and battlefields. He says our enemies will work to create confusion and distrust among Americans here at home.