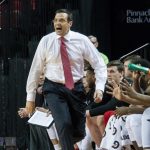 Nebraska men’s basketball coach Tim Miles has received a one-year contract extension, according to an announcement from athletic director Bill Moos on Tuesday.

Miles is now under contract through the 2020-21 season. So far, he’s 97-97 through six seasons. Nebraska has finished below .500 in four of those six seasons.

“We have great young guys in our program,” Miles said in a written statement. “Our spring workouts are going well, and we are excited for next season. As this past season showed, we are building in the right direction. I am appreciative of the University administration and Athletic Director Bill Moos for their support of our program.”

In his sixth season, Miles guided Nebraska to one of its best seasons in history. The Huskers finished the 2017-18 season with a 22-11 record and a birth in the NIT. Nebraska also won a school-record 13 Big Ten conference games.

“Tim and his staff did an outstanding job this season with 22 wins and 13 Big Ten Conference victories,” Moos said in a written statement. “That type of performance certainly merits an extension of Tim’s contract as the leader of our men’s basketball program.

“I have been very impressed with the energy and passion Tim provides for the Nebraska men’s basketball program, as well as his commitment to his staff and the young men on our team.”