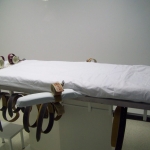 LINCOLN, Neb. (AP) – Nebraska’s longest-serving death-row inmate has been denied a pardon hearing after he claimed officials are too “lazy or incompetent” to execute him.

The Nebraska Board of Pardons voted 3-0 on Tuesday to reject Carey Dean Moore’s request. Moore was sentenced to death in 1980 for murdering two cab drivers in Omaha.

Secretary of State John Gale, who serves on the board, says petitions from convicted murderers are routinely denied.

Moore unsuccessfully appealed his sentence several times but has made no new attempts in over 10 years. He says he doesn’t believe state officials actually want to execute him.