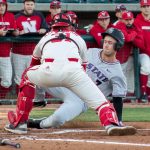 LINCOLN – Nebraska (16-18) fell into old habits early, and despite a solid showing from the bullpen, fell to Kansas State 4-3 on Tuesday night at Haymarket Park.

Senior Matt Warren (3-3), who started in a midweek game for the first time this season, rarely looked sharp in his eighth overall start of the season, allowing all three of Kansas State’s runs to score in two innings of work. He walked two batters (both leadoff) and struck out one in only 43 pitches thrown.

“We didn’t look sharp early on,” Nebraska coach Darin Erstad said. “Again, just kind of a broken record. Not taking care of the baseball, leadoff walks. It didn’t look like (starting pitcher Matt Warren) was really engaged, a little off his schedule, and didn’t look like he was very engaged. It hurt us.”

K-State scored the first run of the game in the top of the second, thanks to a SAC bunt by junior Rainer Ausmus to put runners on second and third base with only one out.

An RBI single by sophomore Will Brennan in the next at-bat put the Wildcats up 1-0 after two.

Kansas State scored two more in the top of the third. After senior Hanz Harker led off with a walk, sophomore Cameron Thompson doubled to right, and a throwing error by freshman right fielder Keegan Watson scored Harker.

It was only Watson’s second start of the season.

“You try and give a kid an opportunity who can really swing the bat, but I’m sure things are going 1,000 miles per hour,” Erstad said. “It’s not lack of effort. These guys are trying to make plays, and probably trying to do too much.”

A groundout RBI by K-State’s Drew Mount scored Thompson from third base, putting the Wildcats ahead 3-0.

Nebraska’s offense responded in the bottom of the third. Freshman Jaxon Hallmark led off the frame with a walk, and freshman Gunner Hellstrom got on with a one-out single to left. Sophomore Mojo Hagge drove in the Huskers’ first run with an RBI single to left.

With two outs, junior Jesse Wilkening singled up the middle to score Hellstrom, making the score 3-2 K-State after three innings.

The Wildcats added another run in the top of the fourth with an RBI single by Thompson, making the score 4-3.

Nebraska responded again in the bottom of the fifth. Hagge got aboard with a one-out single to right field, and Wilkening brought him home with a double deep to right center, making the score 4-3 Kansas State after five innings.

Neither team scored for the rest of the night.

Wilkening finished 2-for-4 at the plate with a team-high two RBIs, but a lot of Nebraska’s reliable bats went cold. Senior Scott Schreiber went 0-for-5 to halt a 12-game hitting steak. Senior Zac Repinski and junior Angelo Altavilla both went 0-for-4.

The Wildcats used five different pitchers throughout the evening, with Brennan (1-0) getting his first win of the season. The sophomore lefty retired the first six Huskers in the game, and the bullpen kept NU hitless in the final four innings.

“Different pitcher every inning basically,” Wilkening said. “That throws off your timing. It’s hard to find a rhythm, I guess you could say.”

The Huskers’ bullpen was solid throughout. Junior Nate Fisher replaced Warren in the third inning, and tossed four total frames, allowing only five hits and one earned run. Fisher struck out two batters and walked none.

“I think there’s a lot of team effort involved,” Waldron said of his late efforts. “I just wish we could have gotten a couple more runs.”

The bullpen was the one silver lining in an otherwise forgettable game for Nebraska on Tuesday night.

“I thought Nate threw the ball very well and Mike threw the ball well,” Erstad said. “They gave us a chance, and that’s all we could ever ask, but offensively, I didn’t feel like we got anything going.”

The Huskers are back home Wednesday night to face Omaha (12-19), who lost 9-2 at Creighton on Tuesday.

First pitch from Lincoln on Wednesday is set for 6:35 central. Erstad hasn’t yet announced a starting pitcher, but he said it will be a bullpen day.