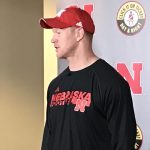 Nebraska’s spring game will be a traditional one on Saturday.

Head coach Scott Frost said after Tuesday’s practice that the annual Red-White scrimmage will be a normal game format during the first half, and then a running clock in the second half until the last five minutes in the fourth quarter.

The assistant coaches will call plays, while Frost will mainly be an observer.

As for the teams, Frost said the majority of first-team players will be on one side, and the rest of the roster will be on another.

“I want to give guys some experience of having success on both sides of the ball,” Frost said. “We’ve done it that way before and the other team would win, so I expect great competition. There will be a couple of guys that get some reps and will get out of there for health sake, then I expect a pretty even ball game after that.”

For health sake, Nebraska is in a bit of trouble this week. Frost said there’s “a pretty good virus” going around the team that’s forced a number of players to miss practice over the last several days, including sophomore receiver J.D. Spielman.

“We have some guys with bad fevers and a lot of guys sick,” Frost said. “We had a number of guys missed today and J.D. has missed a few days, so we’re trying to get them all healthy and hopefully have them ready for the spring game, but we’ll see how we can contain this thing and keep everybody healthy, but right now our numbers are dangerously low going into the spring game.”

No players have been ruled out of the spring game at this time due to illness.

In terms of what’s happened on the field, progress this spring has been encouraging for Frost, but the work doesn’t stop after the spring game.

“This whole thing is a work in progress,” he said. “There was a lot of things we needed to change, fix, develop, to get the team where we want it. I see improvement every day. Sometimes, two steps forward and one step back, but I’m seeing guys embrace what we’re asking them to do. I’m seeing guys improve, but we have a long way to go. The spring game won’t look as good as I want it to look, no practice is looking as good as the coaches want them to look right now, but we are getting better every time we go out.”

Frost said a collision on the field during practice led to the hospitalization of one player. That player was redshirt freshman defensive back Bradley Bunner from Clarkson, NE, and he has since been released. Frost noted the hospitalization was mostly precautionary.

Sophomore receiver Jaevon McQuitty will be someone to watch this Saturday. He missed all of 2017 due to knee surgery, but he’s made a strong recovery this spring.

“Jaevon has really turned a corner the last two practices in my mind,” Frost said. “Watching him, he’s starting to get it, starting to understand, starting to play with some pace and detail his work, and I’ve seen more plays out of him the last couple of days, so I’m excited for his development.”

The decision on this battle won’t come for “a long time,” according to Frost. The staff won’t evaluate a starter until sometime in fall camp to give all of the QBs a chance to better understand the offensive scheme.

“We have a long way to go with leadership,” Frost said. “I’m not sure leadership was developed really well here. We’ve got some guys that are capable of doing it. We just need to create opportunities for them to be leaders and let them take the ball and go with it. We need to train our leaders better. Once the team is holding each other accountable, and the coaches don’t have to do it, you have a powerful team.”

Frost said the staff is currently in the “first stages” of teaching leadership, and it will continue into the summer and fall.