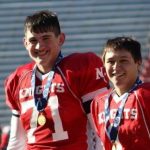 The Nebraska football team landed its third commitment of the 2019 class on Monday morning.

Norfolk Catholic defensive end Ethan Piper made his verbal commitment to the Huskers via Twitter. Piper said in a written statement that Husker Football is “the lifeblood of being a Nebraskan. To wear this jersey means so much – an honor and responsibility I will do everything to uphold.”

At 6-foot-4 and 275 lbs., Piper is a three-star prospect, and ranked as the fifth best player in the state on both 247 Sports and Rivals. He received a Nebraska offer just five days ago on Feb. 28.

He also had offers from Iowa, Ohio and South Dakota State. Piper joins Scottsbluff’s Garrett Nelson and York’s Garrett Snodgrass as Nebraska’s only other 2019 commits.

Piper helped lead the Knights of Norfolk Catholic to a perfect 13-0 season and a 35-0 win over Newman Grove in the Class C-1 state football championship on Nov 21., 2017.