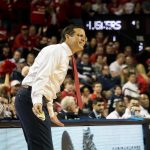 All Nebraska fans can do now is hope that the other bubble teams lose.

No. 4 seed Nebraska (22-10, 13-6 Big Ten) had a chance to perhaps clinch a berth to the NCAA tournament, but instead were suffocated by No. 5 seed Michigan 77-58 on Friday afternoon at Madison Square Garden.

The Huskers now must wait until Selection Sunday on March 11.

“I believe we’re an NCAA tournament team now,” Nebraska head coach Tim Miles said. “We just ran into a buzz saw with Michigan, but I don’t think that undoes what we’ve already accomplished. What we’ve done is we’ve won games away from home and we’ve beat the teams we should beat with maybe one exception (Illinois).”

Nebraska at that point, and in many other points throughout, looked confused. Lost. Overwhelmed. Panic-stricken. Or some combination of that.

“I don’t think there’s any question the guys kind of felt the burden of expectation,” Miles said. “You could just see, and you could see it in their reaction afterwards.”

The momentum shifted briefly at the end of the first half. Nebraska made seven free throws in the final 2:35 of the half to spark a 9-1 run and go to the locker room only down 34-24.

Ten seconds after halftime, Isaiah Roby received a lob from Glynn Watson and dunked the ball to make the score 34-26; the first time the game was within single digits in over ten minutes.

Nebraska hung in, trailing 43-35 with 13:21 to go. Two threes and a quick layup later, the Wolverines separated themselves once more, leading 50-35 at the under-12 media timeout.

The Huskers made only five more field goals after that and overall had a miserable day shooting the basketball, making only 16-for-53 (30.2 percent).

“Michigan just really played excellent, sound defense, too,” Miles said. “It put us in a position to over handle the ball, take some real questionable shots. Then, we just couldn’t get back on top once we got down by 11 or whatever it was.”

Michigan shot 27-for-61 from the field (44.3 percent), but really shined from beyond the arc, sinking 11 threes. Nebraska was 4-for-16 from three, with two of those coming in garbage time with under five minutes to go.

“Credit Michigan, I thought they played terrific,” Miles said. “Their offensive pace really got us on our heals early. When they make 11 three-pointers, you’re in big trouble.”

The lethal duo of senior Muhammad Ali Abdur-Rahkman and junior Moe Wagner proved deadly for Nebraska. Those two combined to score 41 points and shot a combined 7-for-9 from three-point land. Wagner dropped his seventh double-double of the season with 20 points and 13 rebounds.

Nebraska kept its head above water at times by getting to the charity stripe, and making 22-of-27 shots.

The NCAA Tournament selection show will be Sunday, March 11 at 5 p.m. central and will be televised on TBS.