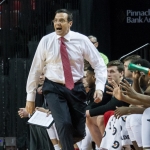 There have been many great stories surrounding the Nebraska men’s basketball team this year with the historic season that they’ve had, and one of the more amusing ones has been the ‘Bench Mob’ celebrations.

Some have wondered where that all began, including CBS Sports Radio host Jim Rome, who had Nebraska head coach Tim Miles on as a guest on the ‘Jim Rome Show’ Tuesday. Miles said it likely began with Jack McVeigh.

The junior forward from Australia went from playing in 30 games last year to riding the bench this year. He hasn’t seen any significant playing time since getting in for 21 minutes in a loss at Penn State on Jan. 12.

Miles was so proud of McVeigh’s effort that night that he wanted his teammates sitting next to him to cheer him up.

“God, here’s Jack – he used to be a starter and now he’s at the end of the bench with the rest of us,” Miles said. “They were celebrating (Jack) that night so much at (Penn State) that they’re like, Jack, you’ve got to get in this with us. We’re going to do this Bench Mob thing,’ and I think it was their way of making Jack feel better.”

Videos of Nebraska’s bench mob have gone viral on social media, being retweeted by SportsCenter, the Big Ten Network and numerous others. McVeigh has been seen right in the middle of the celebration.

“I think it’s kind of cool, leaving a legacy or something,” senior walk-on and mob member Malcolm Laws said. “Just something that I can look back on and say, ‘Oh we started that, you know?'”

Get you a bench that can do both. pic.twitter.com/7yTGbNJeiH

Other Notes from the Interview

“He’s done a lot of little, tedious work to get himself in position,” Miles said. “I mean, he started out the game (Sunday) night. We threw the ball to him at the top of the key on a pick-and-pop. He takes two dribbles and dunks over a 6-11 kid (Julian Moore), and the place went bananas.”

We're underway in Lincoln, and Isaac Copeland wants everyone to know.

The @HuskerHoops high-flyer nearly blows the roof off The Vault on the opening bucket: pic.twitter.com/Jh5R0471QL

“I don’t think they’re trying to target any one person or one thing,” Miles said. “They’re saying, ‘Hey. This is wrong. All of this stuff that’s going on, this divisiveness, is wrong and we don’t need to hate each other.”

“I think at the end of the day that most of our tournaments are always going to be in the heart of Big Ten Country,” Miles said. “Indianapolis or Chicago. But, I think it’s good for us to be out there, especially a venue like Madison Square Garden.”