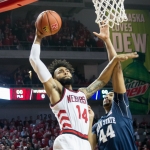 LINCOLN – Nebraska’s tournament résumé is nearly complete, according to the metrics.

According to the team, the criteria has already been met.

“I feel like we should be in,” senior Evan Taylor said, who finished with seven points and six rebounds in his home finale. “I feel like we’re a team that’s playing well right now, and I feel like if we get in the tournament, we could beat some teams.

“So, hopefully we get the opportunity, because we deserve it. This team has been through everything…I would hate to see our season end and not be in the NCAA tournament, because we’re an NCAA tournament team.”

The Huskers (22-9, 13-5 Big Ten) took another crucial step toward qualifying for the Big Dance by knocking off Penn State 76-64 in front of 15,539 fans at Pinnacle Bank Arena on a day that’ll likely go down as ‘No Sit Sunday II.’

Tim Miles described it as a “historic night.” For many reasons.

“I’m happy that our senior night turned out well for our seniors,” Miles said. “This is a very important night. A historic night from what I’m hearing. I’m just really proud of these guys. Certainly, we want to hit more goals and we want to go a lot farther, but I’m just happy that this night, they can just enjoy that (win) and put that in their back pockets.”

The Nittany Lions (19-12, 9-9 Big Ten) had a brutally tough schedule to end the regular season with games against Purdue, Ohio State and Michigan in the past week. They lost their third straight game, and will play as the No. 7 seed in the Big Ten Tournament this week.

“Obviously, (Nebraska) jumped us,” Penn State head coach Pat Chambers said. “Senior night, a lot of emotions, a lot riding on this game. Give Tim and Nebraska credit. They’ve been playing really good basketball over the last month. They came out and punched us in the mouth.”

The Huskers got off to a thunderous 19-7 start in the first ten minutes sparked by junior Isaac Copeland, who scored NU’s first seven points. Nebraska took a 34-17 lead into the locker room.

“I think those first possessions meant everything,” Miles said. “It started things off with a bang and we got things rocking right away. There’s nothing better than that. You couldn’t plan it better. (Copeland) was just so good.”

Copeland finished with 17 points, 12 rebounds and four assists; all team-highs. That also gave him his third double-double of the season.

“I just do what I can to set the tone,” Copeland said. “Last time we played (Penn State), they kind of got a pretty good lead on us, so I was pretty upset about that last game. I just wanted to come out with some energy and make some plays.”

Nebraska has clinched the No. 4 seed and a double-bye, meaning they’ll play either Michigan (5-seed), Illinois (12-seed) or Iowa (13-seed).

The Huskers were picked to finish 13th in nearly every preseason poll.

“It looks like an NCAA tournament team to me,” Miles said. “We had some bad luck with our conference schedule, but we’re willing and able to play anybody. We’ve done a good job winning away from home (). Really, the predicted metrics are the one killing us. The result metrics (RPI, BPI), they’re not too bad.

“That’s what I’d tell (the committee) is ‘pay attention to results. Not the computer predicting how we’re going to do.'”

One more win, and Nebraska is a lock in everybody’s eyes and brackets, but they’ll be looking for more than that in Madison Square Garden.

“We want to go win the Big Ten Tournament,” Miles said. “That’s the goal. We want to go cut the nets down. That’s where it begins and ends. As far as the NCAA tournament résumé, I don’t think I’m even going to talk about that with the guys. I think I’m going to talk with a single-minded goal – let’s go there and try and win that tournament. Be Big Ten champions.”

Nebraska will play at approximately 1:30 p.m. central time on Friday. All Big Ten tournament games will be televised on the Big Ten Network.