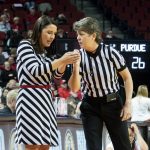 Nebraska women’s basketball coach Amy Williams was named a semifinalist for the Werner Ladder Naismith Women’s Basketball Coach of the Year award on Wednesday. The award is presented by the Atlanta Tipoff Club.

The winner of the award will be announced on March 31.

After going 7-22 in her inaugural season last year, Williams has engineered one of the best turnarounds in the country, with the Huskers sitting at 19-8 overall and 10-4 in the Big Ten. Nebraska is currently in third place in the Big Ten standings, and have a chance to contend for the regular season conference championship in this final week of the regular season.

Williams was named Summit League Coach of the Year in both 2015 and 2016 when she was the head coach at the University of South Dakota. She led the 2015-16 team to a WNIT championship shortly before getting hired at Nebraska.

Thursday’s game can be heard live on KLIN’s sister station B-107.3 FM, with pregame coverage starting at 6:45.