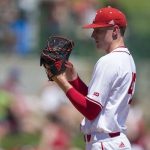 Junior Robbie Palkert will miss the remainder of the 2018 season, according to Nebraska baseball coach Darin Erstad, who made the announcement to the media before practice on Tuesday.

Palkert, a right-handed reliever, threw the final three innings in Nebraska’s season-opening 8-3 win over UC Riverside on Friday to earn the save. Palkert came back out on Sunday, throwing 1.2 innings to earn the win on the mound in a 5-3 victory over Washington State.

The Huskers are already without junior pitchers Chad Luensmann, Zach Engelken and Reece Eddins. Redshirt freshman Connor Curry is also out for the season.

Engelken practiced Tuesday and is expected to at least make the trip to Surprise, AZ this weekend. Eddins could be back in conference play, or sometime in the middle of the season.

With yet another blow to the bullpen, Erstad said a number of younger pitchers could see their workload increase.

“We’re going to just see how they each feel,” Erstad said, “and then hopefully steadily increase their workloads and we’re going to need that moving forward.”

Freshman Andrew Abrahamowicz, along with juniors Byron Hood and Mitch Steinhoff, are some of the more inexperienced pitchers who saw action last weekend in Tempe who could be relied upon more.

As for the starting rotation on the mound, Erstad did not announce the lineup for this weekend. Nebraska’s schedule in Surprise looks like this:

All of these games will be carried on KLIN with pregame coverage starting a half hour before first pitch.