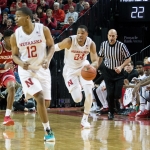 LINCOLN – Both teams started slow, but it was Nebraska (21-9, 12-5 Big Ten) that proved to be the more efficient team down the stretch, outlasting Indiana 66-57 on Tuesday night at Pinnacle Bank Arena in front of 15,177 fans.

The first half was sluggish, with both teams combining for 16 turnovers and shooting a combined 4-for-20 from the three-point line.

The Huskers turned it on in the second half, shooting 51.9 percent, and getting to the free throw line 17 times after not getting there at all in the first half.

Nebraska made only 10 of those 17, but Nebraska coach Tim Miles will take that.

“Tonight was one of those nights where they earned victory,” Miles said. “Hopefully, that can really help them build that belief that we can beat anybody.”

Senior guard Evan Taylor was a big part of both scoring runs, scoring all seven of his points and grabbing five of his seven rebounds in the second half.

“I just try to go out every night and do what I’ve got to do for us to win,” Taylor said. “Whether that’s to bring energy defensively or try to bring baskets. That’s what I try to do.”

“Good win by Nebraska,” Indiana coach Archie Miller said. “I thought they really finished the game the last eight minutes the right way. We had a really hard time all night taking care of the ball. We played hard, had some guys do some really good things. I thought we were right there for a good portion of the game, but you can’t do that on the road…19 turnovers. Just not going to get it done.”

On a night where offense tended to be stop-and-start, the Huskers relied on their defense to slow Indiana down late. The Huskers outrebounded the Hoosiers 39-33 and won the turnover battle 19-14. Nebraska turned those 19 turnovers into 26 points.

Indiana also only shot 3-for-14 from the three-point line after making 14 threes against Iowa on Saturday.

“The important part was to finish the game with a great defensive stretch,” Miles said, “and control the ball on offense and put them away. The first half, the way we played, I wasn’t sure that it was going to end like that, but as we got into the game and kept plugging along…as an upstart (team), you have to earn confidence. I think that’s what happened through the course of the game.”

Nebraska concludes the regular season on Sunday with a crucial showdown against Penn State (19-10, 9-7 Big Ten). Tip-off from Pinnacle Bank Arena is set for 4:15 central. The game will be televised on the Big Ten Network.

“Penn State has as much talent as anyone in this league,” Miles said. “They have a tremendous team. That game should be a high-level game. We just have to do what we can do, control what we can control, and play a great game on Sunday.”