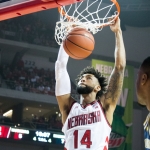 The Nebraska men’s basketball team’s NCAA tournament hopes took a hit on Sunday, as the Huskers (20-9, 11-5 Big Ten) fell to Illinois 72-66 at the State Farm Center, putting a stop to their six-game winning streak.

“A really disappointing night,” Nebraska coach Tim Miles said during a post game interview on the Husker Sports Network. “I was disappointed that we didn’t practice better coming into this. They looked like they were ready for a game, but not sure how willing they were to do the work to get ready for the game. That’s not an indictment on these guys, they always play hard, but boy tonight we just…it’s hard. This league is hard.”

The Huskers remain tied for fourth place in the league. They’re tied with Michigan after the Wolverines defeated Ohio State 74-62 on Sunday.

Nebraska led by as many as five points in the second half, but Illinois closed the game on a 14-5 run over the final six minutes.

“It was just one thing or another,” Miles said. “We couldn’t extend the lead for different reasons. We didn’t get much done at that point in transition, where we had some opportunities, but (Illinois) had some good hustle plays, too.”

The Illini shot 62 percent in the first half, but only 27 percent the second half. The Huskers switched to a 2-3 zone defense, but it was the offense that couldn’t come through. The Huskers were just 10-for-18 from the free throw line, and made only 37 percent of their shots in the second half. Illinois also won the rebounding battle 38-29.

“What I think hurt us is our offense,” Miles said. “We just didn’t make our free throws, we didn’t make our easy shots, our inside shots. Our defense the first half was not good.”

Nebraska had only one field goal during the final six minutes. Nebraska was led in scoring by junior Isaac Copeland who had 17 points. Sophomore Isaiah Roby dropped his third straight double-double with 14 points and 10 rebounds. Junior James Palmer was a little quieter than usual, finishing with 13 points and four assists.

Nebraska will return to Lincoln to host Indiana at Pinnacle Bank Arena on Tuesday night. Tip-off is set for 8 p.m. The Hoosiers have won four straight games.