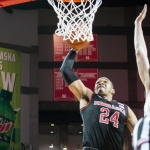 LINCOLN – Sixteen minutes had run off the clock in the first half, and Nebraska’s star point guard, James Palmer Jr., had yet to score a point.

The Huskers’ other star, junior forward Isaac Copeland, had just drained a three-pointer to pull Nebraska to within one point, 27-26, with 4:23 to go until halftime, finally getting Pinnacle Bank Arena’s 15,397 fans out of their chairs.

Maryland missed a three-point attempt on the ensuing possession. Copeland got the rebound and passed the ball to senior Evan Taylor, who found Palmer in transition, and Palmer did the rest; a one-handed slam in traffic to give the Huskers a 28-27 lead.

James Palmer Jr… YOU ARE RIDICULOUS! 😳

The @HuskerHoops star drops an absolute hammer, and it's a #BTNStandout Presented by @Discover: pic.twitter.com/qluh03bpJQ

Palmer finished with 26 points on 10-for-19 shooting to go with five assists and four rebounds.

His 24 points in the second half tied a school record.

It was Nebraska’s sixth consecutive win overall, and it gives NU 20 wins in the regular season for the first time since the 1992-93 season.

“It’s great, but we’re not planning on stopping here,” Tim Miles said, who got to 20 wins for the first time as Nebraska’s head coach in his sixth season. “I told our guys a week ago, if you’ve counted wins, you’ve done it wrong, because if you think ‘we can win 21 or 20 this year,’ you need to get your mind free of that and just keep playing and keep winning.”

With both teams’ RPI hovering in the mid to upper-50s, and limited opportunities for resume wins remaining, Wednesday’s game had a bit of an elimination feel to it.

“(Maryland) is battling like a team trying to make it (to the NCAA tournament) too,” sophomore forward Isaiah Roby said. “All of the teams from here on out are playing for something, so I mean, it’s like a tournament game. You lose, you hurt your chances a lot. So, we’re taking everyday like it’s our last pretty much.”

Roby had no points in the first half, but also came out strong after intermission to log his second straight double-double with 11 points and 10 rebounds.

Palmer and Roby combined to score 35 of Nebraska’s 40 second half points.

“That’s big,” junior guard Glynn Watson said. “James, he got cooking. I’ve got to talk to Coach Miles about taking him out. They both made big plays at the end. Roby did a better of job in the second half of being aggressive, and that was the key to winning.”

In the final 5:42, the Huskers didn’t make a single field goal. Their last seven points all came on free throws.

After starting 7-for-13 from the foul line, Nebraska made their final six in a row to go 13-for-19 on the night.

Defensively, Maryland made it clear they wanted it to be a battle down low, and were successful early on, leading 32-30 at the half.

The were led by freshman forward Bruno Fernando, who finished with a team-high 21 points and nine rebounds, narrowly missing his third double-double this season.

It wasn’t enough, as Maryland dropped their seventh consecutive road game and have now lost eight of their last 12. Six of those eight losses have come by single digits.

“Another tough loss for us on the road,” Maryland coach Mark Turgeon said. “We keep competing out here and losing by three or four. I thought we were going to get over the hump tonight. We had the ball with 40 seconds to go down one, and couldn’t get a shot.”

Palmer’s 26 points will be and should be the headline of this game, but Nebraska’s defense down the stretch was just as important.

“I really think our defense and our ability to keep them off the three-point line and still rebound with them was just as important,” Miles said. “It’s just not as pretty.”

The Huskers outrebounded the Terps 35-31 and never let them lead by more than five points, but the biggest defensive play came with 53 seconds left.

With Maryland trailing 64-63, sophomore guard Anthony Cowan heaved up a deep three-pointer coming out of a timeout.

Glynn Watson jumped in front of the shot, and got just enough hand on the ball to knock it off course.

“I was just trying to be in the right spot to be honest,” Watson said. “I know he was probably going to try and go for a three, so I just kind of cheated it and made a big play.”

Watson, despite only scoring eight points on 2-for-12 shooting, eclipsed 1,000 career-points.

“It really don’t mean nothing to me, really,” Watson said, “unless we win it. We’ve been winning. I haven’t been playing that well on offense, but I just try and bring it on defense. It means a lot I got 1,000 points, but if you don’t win, it don’t mean nothing.”

Nebraska is off until Sunday, before they travel to Illinois for their final road game of the regular season. Tip-off from the State Farm Center in Champaign, IL is set for 2:30 p.m. The game will be televised on the Big Ten Network.