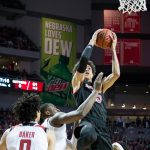 LINCOLN – Senior Evan Taylor said on Friday that he was confident his team could separate what they do on the floor from what they do off of it.

Nebraska had four players score in double figures and played scrappy defense throughout on Saturday afternoon in a 67-55 win over Rutgers (12-15, 2-12 Big Ten) at Pinnacle Bank Arena.

Nebraska coach Tim Miles said he could tell the team’s mood was off before Tuesday night’s game at Minnesota, due to recent events on UNL campus regarding hate speech and racism.

He could also tell something was at yesterday’s practice. At least early on.

“I thought that practice was really slow (Friday) to start with,” Miles said. “Then, we played pretty good after that. We started practicing, and by the end, I looked at (assistant coaches Kenya Hunter and Michael Lewis) and I’m like, ‘This looks like a team, right?’ So, I felt a lot better after practice, but until about the midway point of practice, I was worried.

“You spend a lot of emotional energy on a week like that, and that’s what I told the guys. Stay off social media. You can’t read everything that’s out there, so just relax and get ready for an afternoon game. They looked fine to me. They came out and played well in the first half.”

On Tuesday, despite outside distractions, the Huskers got their first win at Williams Arena since joining the Big Ten and scored the most points in a conference road game since 1999.

On Saturday, despite amplified outside distractions, the Huskers won their fifth straight game, making them 8-2 in their last ten.

“I felt pretty good about the team’s attitude and everything,” senior Duby Okeke said. “I think that kind of goes with, you know, us maturing as a team together. We’re kind of like a little upset about everything else going on, but we knew once it comes to basketball, we’re going to be fine.”

Nebraska kept another promise made Friday; the team wore matching warmup shirts with the phrase “hate will never win” on them. There was also a video played before the game as a way to further spread their message.

It certainly was all basketball for Roby, who finished with 10 points, 11 rebounds, two assists and two blocks. It was only Roby’s second double-double of the season, which is a little hard to believe considering how much he packs the stat sheet every game. He was also fresh off of a career-high 19 point performance at Minnesota four days ago.

“Just being more aggressive,” Roby said of his offensive production. “Just trying to move harder, cut harder and not be so timid out there. My teammates have been finding me really well, so that’s just a product of that.”

Nebraska also had solid contributions from their other usual suspects. Junior James Palmer dropped a game-high 15 points to go with five rebounds and four assists.

“We had good mentality, and we were aggressive,” Miles said. “Isaiah Roby did a really good job tonight, Jordy Tshimanga was solid for us and important. Those little 4-for-6s, they add up, especially when you have some 5-for-14s. I just thought we had a nice pace about us to start the game.”

Okeke also provided a spark, and a season-high four blocks off the bench, to go with two points and four rebounds in just six minutes.

“I came in for a few minutes and just gave a spark,” Okeke said. “For me, it’s just like being the older guy. I like having a mature approach. If I’m not in the game, then I try to give energy on the bench. And if I come in the game, I do, but just have to take the good with the bad, whatever happens.”

“It was an excellent start in a league game at a critical time,” Miles said. “So, that makes it very important, and I’m happy it happened.”

Rutgers didn’t quit. They made it a 27-22 ballgame with 7:35 left until halftime, but that’s as close as they got.

“(Rutgers) does such a good job,” Miles said. “Offensive rebounding is just like transition or three-point shooting for another team. They teach it, they play to it, but the fact we outscored them on second chance points (18-17) was pretty good. I think a guy like Duby Okeke, who blocked a whole bunch of shots, and Roby did too, probably saved us.”

Rutgers’ strength this season has been defense, and that showed at times Saturday. The Knights won the rebounding battle 43-39, and held Nebraska to just 3-of-15 shooting from the three-point line.

The Scarlet Knights, who’ve now lost seven straight games and have yet to win a conference game on the road, were led in scoring by junior Corey Sanders who scored 14 points. Senior Deshawn Freeman scored a dozen, and sophomore Eugene Omoruyi had 11.

Nebraska is back home on Tuesday evening to face the Maryland Terrapins (17-10, 6-8 Big Ten), who knocked off Northwestern at home 73-57 on Saturday. Tip-off is set for 6 p.m.

“We haven’t beaten Maryland yet at home (since joining the Big Ten),” Miles said. “They played well today, and we’re going to have be our best for that game on Tuesday.”

Meanwhile, on the bench…

“The guys on the bench, they do a great job preparing the other guys for the game,” Okeke said. “We just kind of like do our job of picking up other guys that play. When it comes to celebration, it’s just on the fly…it’s probably one of the best feelings when you act a fool and you’re happy for your teammates.”