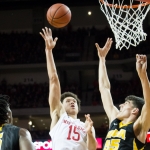 Roby hit 8-of-10 shots from the field and narrowly missed a double-double by grabbing eight rebounds. Junior guard James Palmer Jr. narrowly missed a triple-double as he battled foul trouble to add 19 points, seven rebounds and a career-high nine assists.

“So many different guys made plays,” Nebraska coach Tim Miles said in a post game interview on the Husker Sports Network. “Palmer gets in foul trouble, he’s been a go-to guy for us, and Evan (Taylor) has a stick-back or a (bucket) in transition, or a huge three. Roby was all over the place.”

“We got some much needed rest,” Gill said. “A lot of people got their legs back. Once we got in the flow of things, you saw we really got it going in the first half. (Minnesota) is a tough team, they play hard, and road wins are always big, so we’re happy to get that.”

Nebraska shot 50.8 percent from the field and was 11-of-23 from the three-point line. The Huskers hit 8-of-12 from distance in the first half. Nebraska was also 18-of-22 on free throws.

The Huskers’ 91 points were the most in a conference road game since 1999. The win was Nebraska’s first at Williams Arena since December 2003.

The Huskers notched their sixth win in seven games, and they remain in fourth place in the Big Ten standings with a 9-4 mark in conference play. Northwestern’s  61-52 win over No. 20 Michigan on Tuesday helped Nebraska take sole possession of fourth place.

Nebraska returns home to host Rutgers on Saturday at 3 p.m. The Huskers play four of their final five games at home. The Scarlet Knights (12-14, 2-11 Big Ten) have lost six straight games and eight of their last nine.