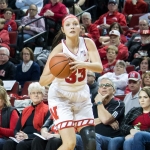 Nebraska kept No.11 Maryland within striking distance, but the Terrapins (20-3, 9-1 Big Ten) prevailed 64-57 over the Huskers (17-7, 8-3 Big Ten) at Pinnacle Bank Arena on Sunday afternoon. The Terrapins have won 18 of their last 19 games, while Nebraska’s five-game winning streak came to an end.

Maryland’s Kaila Charles helped the Terps improve to 20-3 and 9-1 in the Big Ten by scoring a career-high 25 points while adding a game-high 16 rebounds. Maryland outrebounded the Huskers 49-29. Head coach Amy Williams said one of her team’s goals within this game was to win the rebounding battle.

Despite being a perfect 8-0 in true road games, Nebraska is just 3-4 in their last seven road games.

“That was kind of a huge goal for us,” Williams said. “To get pounded on the boards like we did was just kind of disappointing, as well as losing on our home court.”

Kissingner was the only Husker to finish in double figures. Nebraska shot a modest 35.6 percent (21-of-59) from the field.

“(Maryland) kind of had us out of sync and out of rhythm,” Williams said. “We were struggling to find anybody that could give us a spark there and really give us that scoring punch, and (Kissinger) gave us, in both halves I thought, kind of a scoring punch and kind of gave us a little shot in the arm right there.”

The loss marked the closest game in the series with Maryland, who are three-time defending Big Ten champions. It was the first time the Huskers have played Maryland within single digits in all seven meetings.

The Huskers will enjoy some days off before completing their three-game home stand against Wisconsin on Sunday. Tip-off is set for 2 p.m.

The area Williams plans to cover the most before Sunday’s game is rebounding.

“We’ve got to become a better rebounding team,” Williams said. “I think that’s kind of going to be our focus this week. We’ve been talking about finding ways to continue to press on the gas and continue to improve, and the only way I can see that’s going to happen is for us to shore up that rebounding.”