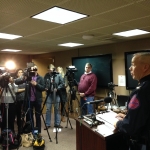 LINCOLN, Neb. (AP) – Nebraska lawmakers have confirmed a new superintendent for the State Patrol despite some reservations about recent problems in the agency.

Senators voted 37-0 on Friday in favor of Col. John Bolduc, who was appointed by Gov. Pete Ricketts and sworn in for the job on Oct. 16.

Some senators raised concerns that they still don’t have detailed answers about why Bolduc’s predecessor, former Col. Brad Rice, was abruptly fired in June. Bolduc has promised to overhaul the agency and ensure all patrol members are accountable to the public.

Rice’s termination came after news surfaced that the agency had mishandled internal investigations and didn’t properly respond to possible misconduct against female recruits by a patrol doctor.

Rice was chosen following a national search for a replacement.