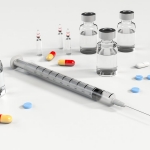 AP It looks like Groundhog Day for the nation’s flu report, too: It’s gotten worse, and there are weeks of suffering ahead.
The government’s latest report out today shows the flu season continued to intensify last week…including here in Lancaster County where officials reported a significant increase in flu reports and doctors’ visits. Flu reports are widespread across Nebraska.

One of every 14 visits to doctors and clinics were for symptoms of the flu. That’s the highest level since the swine flu pandemic in 2009.
Experts had thought this season might be bad, but its intensity has surprised most everyone. The flu usually peaks in February.