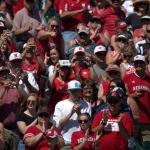 The Nebraska baseball team’s annual Fan Fest is going on Friday night from 6-8 p.m. in the Hawks Championship Center next to Memorial Stadium.

This event gives fans a chance to meet the 2018 Huskers and get autographs. The first 1,000 fans will receive free water and hot dogs. There will also be games and inflatables set up in the Hawks Championship Center. The end of the night will feature team introductions.

“It’s a good opportunity to get autographs,” Jeff Maul of the Lincoln Convention and Visitors Bureau said. “Let the little ones jump on inflatables, but more importantly, hear the introduction of this year’s team. I think there’s a lot of excitement around Husker Baseball for this upcoming season.”

The reigning Big Ten regular-season champions open the 2018 schedule in just two weeks at the Husker Classic on Feb. 16 in Tempe, Ariz. The Huskers will take on UC Riverside at 5 p.m.

Nebraska’s home opener is set for March 8 against Cal Poly. First pitch is set for 1:35 p.m. at Hawks Field.

Fans can purchase season tickets for reserved sections or general admission at Huskers.com/tickets. Starting on Feb. 13 at 10 a.m., fans can select the popular Diamond Deal, which allows fans to customize their own nine-game package depending on availability. Reserved single game tickets go on sale March 1.

Nebraska head volleyball coach John Cook told Jack Mitchell on “LNK Today with Jack & Friends” on Friday morning that he’s been impressed with the energy and excitement around all Husker sports right now.

“The level of enthusiasm right now for Nebraska, for the athletic department, for the University, I’ve never seen such a fever, and excitement and passion for everything going on here,” Cook said.

Nebraska women’s basketball coach Amy Williams said much the same in a Wednesday press conference, right before her team notched their fifth straight win over Illinois on Thursday night.

“There’s just so much excitement right now in the athletic department,” Williams said. “It’s certainly a positive time to be a part of it. It certainly feels like there’s a lot of energy in the department right now.

Starting with baseball’s fan fest, Nebraska athletics has another active weekend ahead. The track and field team hosts Colorado State on Friday in the Husker Invitational, starting at noon, while the 18th-ranked wrestling team is at No. 8 Michigan on Friday, with the meet starting at 6 p.m.

Nebraska women’s gymnastics, ranked No. 9 in the country, plays host to No. 22 Minnesota on Saturday at 7 p.m. at the Bob Devaney Sports Center.

Sunday will be spearheaded by Nebraska women’s basketball’s decisive showdown with No. 11 Maryland. The winner of that game will be in sole possession of first place in the Big Ten Standings.