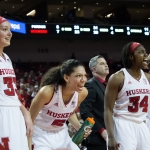 The Nebraska women’s basketball team (17-6, 8-2 Big Ten) relied on their defense to hold Illinois to just 10 first-half points, including just one second quarter point, as the Huskers fought their way to a 62-47 win over the Fighting Illini (9-15, 0-10 Big Ten) at Pinnacle Bank Arena on Thursday night.

Ten first-half points are the fewest that any opponent has ever scored against Nebraska in a half in program history.

“Everybody kind of made that commitment to the things that needed to happen for us to try and get stops,” Nebraska coach Amy Williams said.

With Nebraska’s victory, coupled with Purdue’s upset overtime win over No. 13 Michigan on Thursday, Nebraska climbed into sole possession of second place in the Big Ten standings, trailing only No. 11 Maryland (19-3, 8-1 Big Ten). The Terrapins beat Rutgers 88-60 on Thursday night in Piscataway.

To Sunday’s victor, the spoils. Sunday’s 2 p.m. game in Lincoln against the Terps will be for first place in the Big Ten standings.

“We feel excited for the opportunity that’s in front of us on Sunday,” Williams said. “We didn’t compete the last time that the Huskers got to suit up against Maryland. We didn’t compete very well, and we are excited to try and have a better showing and to be able to come out and be more competitive in that ball game.”

Sophomore Nicea Eliely led the Huskers on Thursday with 11 points on 5-of-6 shooting from the field, including a three-pointer. She also had six rebounds and a steal. Freshman Taylor Kissinger added nine points, six rebounds, two assists and a block in 23 minutes off the bench, helping the Husker reserves outscore the Illinois is bench 26-9.

Kate Cain, Hannah Whitish and Maddie Simon each contributed eight points. The Huskers also outscored the Illini 28-14 in the paint.

“We’re certainly not done,” Williams said. “We want to continue to play well, keep getting better and just find ways to become the best version of ourselves.”