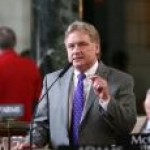 LINCOLN, Neb. (AP) – A Nebraska lawmaker who is running for governor is suing the state to overturn a law that imposes the nation’s highest bar on independent candidates to qualify for statewide races.

Sen. Bob Krist of Omaha announced Thursday he will challenge the 2016 law in federal court. Krist switched his party affiliation from Republican to nonpartisan in September and mounted a campaign against incumbent GOP Gov. Pete Ricketts, who is seeking re-election.

The law in question requires nonpartisan candidates in statewide elections to collect signatures from at least 10 percent of the state’s registered voters, or about 119,000 voters. Before it passed, candidates needed just 4,000 signatures to qualify for the ballot.