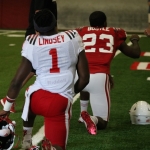 Nebraska wide receiver Tyjon Lindsey and defensive lineman Dylan Owen were hospitalized after a winter workout, but have been released and returned to the team. Head coach Scott Frost first reported the news to the Lincoln Journal Star on Tuesday morning.

Lindsey and Owen were both treated for rhabdomyolysis. Lindsey was hospitalized for three days and Owen for two.

Rhabdomyolysis is a muscle injury, which according to exercise physiology professor Joel Cramer at the University of Nebraska-Lincoln, results from the death of muscle fibers and the release of their contents into the bloodstream, particularly an oxygen-carrying protein called myoglobin.

Cramer tells KLIN that this condition can lead to serious complications like kidney failure, but only in the most extreme cases.

“When myoglobin leaks out into the blood, the kidneys have a very difficult time processing excessive myoglobin in the blood,” Cramer said. “At high levels, myoglobin can be toxic. Now, it takes a lot for it to be toxic or potentially harmful.”

According to Frost, Lindsey’s and Owen’s hospital stays were mostly for precautionary reasons.

Sources said on Tuesday afternoon that Lindsey will be available for spring football, which starts in mid-March.

“Anything that happens in our program is ultimately my responsibility,” Frost said. “Our strength coach (Zach Duval) and training room were coordinating to do absolutely the best they could do to make sure the transition went smooth, but two kids had exerted themselves too far.

“I want to make sure people understand that the health of our players is always going to be out primary concern. It’s been kind of a scary deal and both kids are doing fine now.”

Frost said that he and Coach Duval and the strength staff modified the initial weeks of their workout plan for the Huskers after testing the players on the roster, reducing and moderating workouts because of where most players tested.

“The workout that caused the problem was supposed to be a 40-minute weight workout and it was cut to 32 minutes of weights,” Frost said. “It’s fairly intense, but it’s something that we did with our team for two years at UCF. I’m not trying to make an excuse, but I’m always going to be transparent. We had trainers in the weight room during the workout to pull guys out of the workout if they saw any problems.

“Our players are our No. 1 concern. We thought we were approaching everything safely and the right way and it turns out that it was a little too much for a couple of them.”

Cramer said players that come back from a holiday break and get back into intense workouts shortly after extended rest could be at risk for this condition.

“They come back, and that unaccustomed exercise of lifting quite a bit of weight can cause that muscle trauma,” Cramer said.

Athletic director Bill Moos confirmed through a spokesperson on Tuesday that Duval and the strength staff will not face any discipline.

“I find it hard to find fault with him,” Frost said, “but we need to make sure we’re smarter going forward. I know Bill Moos is aware if it and that’s a question for him. I’ve been around Zach a long time and I can promise you that players’ well being is more important to him than almost anybody you’d find.”

Lindsey indicated he was dealing with some kind of health issue when he tweeted out on Jan. 23, “I just ask for everyone’s condolences and prayers for my health. I’ve been going through something I’ve never experienced ever and your thoughts, along with your prayers motivate me. Thank you dearly!”

Lindsey, who’ll be a sophomore this fall, played in all 12 games as a freshman in 2017, finishing with 12 catches for 76 yards.

Owens is a walk-on defensive lineman from Winchester, New York who first joined the program in 2014 and has yet to play in a game.

Cramer said this type of condition isn’t common, but not unprecedented. Players have been hospitalized due to offseason workouts at other schools in recent years, including three last year at Oregon and 13 at Iowa in 2011.