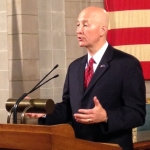 LINCOLN, Neb. (AP) – Nebraska Gov. Pete Ricketts is pitching his property and income tax plan to lawmakers while acknowledging that the package still needs some work.

Ricketts presented a legislative committee with a new version of his proposal Wednesday that would provide income tax credits to resident homeowners and agricultural landowners.

The new proposal won support from the Nebraska Farm Bureau and other farm groups that previously opposed the governor’s legislation. Some farm organizations remain opposed.

Ricketts is proposing to pay for the plan by using an existing tax credit that benefits all property owners, regardless of whether they live in Nebraska. It also would require pulling money from the cash reserve.