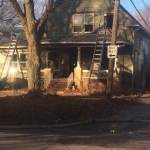 Fire destroys a home this morning on South Ninth Street. Battalion Chief Leo Benes told reporters on the scene that a passerby reported heavy flames in the basement. Benes says that as firefighters made entry they had collapse in the back and so they pulled fire fighters back into a stictly defensive operation.

Battalion Chief Benes says they had to cut quite a few holes in the home to attack the fire. He says it is a very old home that is balloon framed..meaning the studs in the wall run right from the basement into the attic giving the fire a good head start before they arrived on the scene.

Battalion Chief Benes says that the occupants were not home at the time so there no injuries. The residents’ pet dog was killed in the fire. The cause continues to be under investigation.