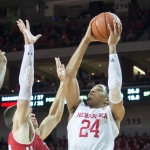 Wisconsin took its biggest lead of the night, 55-44, with 9:59 to go in the game after a highlight reel dunk by junior guard Khalil Iverson capped a 12-4 scoring run.

No one could have foreseen the run that was to follow.

It was Nebraska’s first win at Wisconsin since Dec. 11, 1990 and its largest comeback of the season.

The win was also Nebraska’s third straight overall, its third true road win of the season and it keeps the Big Red firmly in fourth place in the Big Ten standings.

“I was just really happy with those guys,” Nebraska coach Tim Miles said during a postgame interview on the Husker Sports Network. “They were tough-minded, and to get a road win with the really difficult, unusual circumstances, you know, it feels good to be 8-4 (in the conference) at this point.”

Nebraska was once again led in scoring by first-team all-conference caliber guard James Palmer, Jr., who scored 21 of his game-high 28 points in the second half. He also led his team with eight rebounds.

Palmer’s partner in crime, junior forward Isaac Copeland, had another solid night with 17 points on 6-of-9 shooting. He also tallied five rebounds, two steals and an assist.

Junior guard Glynn Watson, Jr. had his best performance since scoring 21 at Northwestern on Jan. 12. Watson finished Monday with 15 points and a team-high five assists.

The real issue for Nebraska in the early going was the front court. Jordy Tshimanga and Duby Okeke each had three fouls by halftime, while Isaiah Roby had two.

Roby and Tshimanga both fouled out inside the final three minutes of the game and Okeke never scored a point.

With the Huskers’ big men in trouble, Tim Miles switched to a 1-3-1 zone defense, which ultimately made that final 30-8 run possible.

“I think the hard part was we were doubling Ethan Happ, and he was getting fouled and scoring, and they were getting threes,” Miles said. “You can’t get your butt kicked by (Happ) and give up threes. I wanted to go 1-3-1, I thought maybe the last eight minutes or seven minutes would do it, but we had to go about 10 or 11.”

The story of the game for the first 30 minutes was Wisconsin’s Ethan Happ. The junior forward from Milan, Ill. scored 18 points in the first half, but only seven in the second half, finishing with 25 total.

“Happ got going really early,” senior guard Evan Taylor said, who finished with five points. “He was hard to stop, he was making plays, he was scoring. Thank God he didn’t make a lot of free throws, or he would have had more points.”

Happ still had a banner night individually, also leading the Badgers in rebounds (11), assists (6) and blocks (4).

When Tshimanga and Roby were on the bench, Taylor was tasked with guarding Happ in the final ten minutes.

“We made adjustments defensively,” Taylor said. “We put a more quick and athletic group (on the floor) and credit to the guys that were in there. We just made plays. We were able to contest shots, get rebounds, fly around, so you know, it worked out in our favor.

“Coach (Miles) said they were going to put me on Happ, and I was like, ‘Alright, let’s do it.’ Anything for us to win.”

“Really, going zone is what stopped (Wisconsin’s offense),” Miles said. “A good road win. Well deserved, and those are the ones you need. We’re at a point where we just need to keep winning and put up as many wins as we can, because we don’t have a ton of high quality wins. We left some out there earlier in the year, and that’s what happens.”

Of the Huskers’ six remaining opponents, none of them are ranked and none of them have a conference record better than 5-5 as of Monday night.

Nebraska will now get a full week off before playing its next-to-last road game of the season against Minnesota on Feb. 6. Tip-off from Williams Arena is set for 8 p.m. The game will be televised on the Big Ten Network.