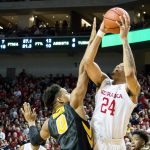 LINCOLN – Nebraska had big nights from their usual suspects and weathered a second half rally from Iowa to post a 98-84 win on Saturday night in front of a sold out crowd of 15,268 fans at Pinnacle Bank Arena.

Junior guard James Palmer, Jr. led his team in scoring yet again, putting up a game-high 28 points on 7-for-12 shooting and an 11-for-14 performance at the free throw line. Palmer also had a team-high five assists.

“James can make so many plays,” Nebraska coach Tim Miles said. “He’s been a very pleasant surprise for me just in terms of how bought in he is to game plan, how bought he is to focus, concentration, and all of those things that go along with it. When you put his talent together with his ability to score and take over a game, it was really good.”

Since his season-low five points at Penn State on Jan. 12, Palmer has scored 19 or more points in the last five games in a row.

“I think I’m more in a groove and my teammates are doing a good job of finding me, and I’m just making the play,” Palmer said.

Junior forward Isaac Copeland had 23 points on 8-for-11 shooting, including 4-for-5 from the three-point line. He also pulled down a game-high 11 rebounds for his second double-double of the season.

“Roby just was steady all night and Copeland really, I thought, shot the ball and looked as good shooting it all week as I’ve seen him,” Miles said.

Sophomore center Jordy Tshimanga, who played his most minutes since Dec. 22, was also key, scoring a season-high 11 points on 4-for-5 shooting. He also grabbed eight rebounds; the most he’s had since a win over Stetson on Dec. 29.

Tshimanga’s rebounding effort helped Nebraska win the battle on the glass 37-28 against the team with the third-best rebounding margin (+5.7) in the Big Ten.

Tshimanga also saw more minutes with Tanner Borchardt unavailable due to illness and Duby Okeke staying on the bench per coaches’ decision.

“I thought Jordy Tshimanga came in and did his best job of the year,” Miles said. “He got some extended minutes, because he earned them and ended up with 11 points and eight rebounds, and that was badly needed. When’s he in the game, we’re a better rebounding team.”

Iowa played Nebraska in close quarters for the first 13 minutes of the game, trailing 30-26 with 6:50 left until halftime. The Huskers closed out the half with an 18-8 run to take a 48-34 lead into the locker room.

Nebraska took a 16-point lead on its first possession of the second half, but the Hawkeyes then proceeded to go on a 20-6 scoring run over the next 5:16, trailing only 56-54 with 14:32 remaining.

The Huskers regrouped, and went back up by double digits less than two minutes later.

“It’s obviously a game of runs,” Palmer said. “They’re a good team, so they’re going to make runs. They have shooters, and guys that can score as well. We just had to stay poised and make our plays ourselves.”

The Hawkeyes (11-12, 2-8 Big Ten) certainly had their moments, and had big performances from sophomores Jordan Bohannon and Tyler Cook, who each put up 24 points.

“I didn’t like the matchup with Cook,” Miles said. “It just felt like that was going to be difficult, and I think that proved correct.”

It certainly wasn’t Nebraska’s best defensive effort. In fact, 84 points is the second most the Huskers have given up this conference season. Nebraska also got outscored in the paint 42-28.

“The one thing about Iowa is they can lead you right down the path of a shootout,” Miles said. “They play quick. If they see an open shot, it’s going up, and you can have a lot of quick possessions. I just didn’t know if we could keep up that way, really.”

All things considered, Nebraska moved one step closer toward getting the appropriate number of wins needed for an NCAA Tournament berth, and now have sole possession of fourth place in the Big Ten standings.

The Huskers have another quick turnaround, going back on the road Monday evening to face the Wisconsin Badgers (10-12, 3-6 Big Ten). Tip-off from the Kohl Center in Madison is set for 8 p.m. The game will be televised on the Big Ten Network.