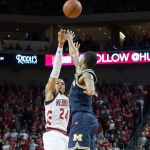 Nebraska trailed for the first 12 minutes of the second half, before back-to-back three-pointers by junior guard James Palmer, Jr. gave the Huskers a 49-46 lead with 7:09 to play.

“James Palmer was spectacular tonight,” Nebraska head coach Tim Miles said during a postgame interview on the Husker Sports Network. “We really just kind of got out of his way, and when you’ve got a guy like that with as much talent as he’s got, he can do that.”

No one else on Nebraska’s team scored more than eight points.

“This is a really good Ohio State team,” Miles said, “and to be able to beat them on the road, you’ve got to just  keep making plays…(Ohio State) had four guys in double figures, and James (Palmer) goes crazy.”

Junior forward Keita Bates-Diop, the Big Ten’s leading scorer, led the Buckeyes with 20 points on 8-for-16 shooting after scoring only six points in the first half. Bates-Diop also had six rebounds, two assists, two blocks and a steal.

Senior forward Jae’Sean Tate was also impressive, scoring 17 points on 7-for-12 shooting. He also had seven rebounds, two assists and a steal.

Despite a handful of stellar performances, particularly from Bates-Diop and Palmer, it wasn’t a great shooting night for either team, especially early on.

Nebraska launched up 16 three-pointers in the first half but only made two of them. The Buckeyes weren’t any better, sitting at only for 1-for-8 from downtown at the break.

Both teams shot under 29 percent in the first half, and both teams finished the game shooting less than 28 percent from beyond the arc.

“I’m proud of our kids defensively,” Miles said. “We chased them off the line. They go 2-for-14 on threes, they’re not a great foul shooting team (16/23), so those numbers don’t surprise me…the kids were really hustling and fighting, and I was proud of them from a defensive aspect.”

But in the final 3:29, Nebraska made only one of their final seven baskets, missed the front end of a one-and-one, and committed two turnovers, including a critical shot clock violation by junior forward Isaac Copeland with 1:35 remaining, which gave Ohio State the ball back leading by four.

Tate then made a layup to put the Buckeyes ahead by six points just 27 seconds later.

“Your margin of error is so slim to beat a very, very good team on the road,” Miles said. “We had a couple lulls, maybe bad shots…it just doesn’t take much of a mistake.”

Nebraska stays on the road this week, traveling to Piscataway, N.J. to take on the Rutgers Scarlet Knights (12-9, 2-6 Big Ten) at the Rutgers Athletic Center on Wednesday evening. Tip-off is set for 6 p.m. central. The game will be televised on the Big Ten Network.

“We need to stay up in the (Big Ten) standings, we need to win that game,” Miles said. “I told the guys afterwards that we’ve worked hard enough, but that doesn’t make Wednesday any easier if we don’t have the same mentality. I don’t want to scare them or threaten them, but I’m like, ‘This is the way it goes. This is the way we have to play to be successful. If we play this way every night out, we’ll be okay, but we’ve got to do it.’

“We’ve got to go out and play with great edge and great intensity, and we did. We really did. We held down an excellent, excellent team, but at the same time, we didn’t do enough to win.”