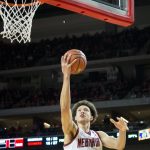 LINCOLN – Tim Miles said after Wednesday’s practice that marquee games against opponents like No. 23 Michigan are “why you take the job.”

A win like the one Nebraska got on Thursday night is why Miles might hold onto his job for awhile.

“I was just very proud of the guys tonight,” Nebraska head coach Tim Miles said. “Kenya Hunter put together a great defensive game plan. We spent a lot of time, he and I, even in the offseason on how we’re going to beat these teams that spread the floor so well.

“I thought Kenya made some adjustments and I thought our guys bought in. They were very focused, very competitive with energy and did a great job.”

There was also plenty of energy coming from the 15,794 fans that packed Pinnacle Bank Arena.

“It was a good environment,” junior guard James Palmer said, who finished with a game-high 19 points. “It definitely helped us and it gave us energy leading into the game. When we made our runs, you could definitely hear them out there.”

They made sure Michigan heard it as well.

“You could see tonight why Nebraska is 11-1 at home,” Michigan head coach John Beilein said. “Credit Nebraska. They had a great game plan. They played much better than us, and they get the ‘W.’ They have a chance this year to be a really, very good team. I don’t think we’ll be the last team to come out here and not come away with a win.”

Michigan (16-5, 5-3 Big Ten) scored a season-low 52 points on just 38 percent shooting from the floor. Junior guard Charles Matthews, a transfer from Kentucky, led his team with 15 points and eight rebounds.

Matthews was the only player on Michigan’s team to score in double figures. Junior forward Moritz Wagner, Michigan’s lead scorer at 14.9 points per game, had just two points on 1/5 shooting.

On Mar. 5, 2017, when Michigan destroyed Nebraska 93-57 on Senior Day, the Wolverines had five players score in double figures and shot 63 percent as a team.

Isaiah Roby, a sophomore this year, played in that game. Thursday’s result might help him forget about it.

Roby finished with a career-high 14 points while also adding three rebounds, three assists, two blocks and a steal in his second consecutive start.

Beilein’s team had trouble slowing Roby down on both ends of the floor. He warned Nebraska’s future opponents that they might have similar struggles.

Junior forward Isaac Copeland dropped 13 points. Senior guard Anton Gill added 10. It was an efficient team effort, as the Huskers shot 55.3 percent (26/47) from the floor. They doubled Michigan in assists 12-6 and won the turnover battle 12-9.

Nebraska has finally beaten Michigan for the first time as members of the Big Ten Conference, and more importantly, has earned a win against the only team left on the home schedule that’s currently ranked.

“I would hope we’re in a good place,” Miles said. “I think we’re fourth of fifth in the league. I think this is a five or six-bid league (for the NCAA tournament). I want to be one of those. You can’t be one of those unless you get there eventually, so the sooner the better.”

Nebraska is back on the road for another tough test against a ranked team on Monday when they take on No. 22 Ohio State at Value City Arena in Columbus. Tip-off is set for 7 p.m. The game will be televised on the Big Ten Network.