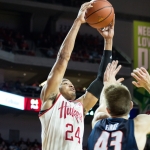 It looked like it was going to be another classic Nebraska Basketball heartbreak.

The Huskers, having led by as many as eight points in the second half, lost the lead with 8.1 seconds to go when junior forward Michael Finke hit what appeared to be a go-ahead three-pointer to put Illinois ahead 63-61.

“We just called a timeout, and they told me and Glynn (Watson) to try and make a play,” junior guard James Palmer said.

Watson brought it up and passed it to Palmer, who in traffic with time fading away, launched up a three (initially ruled a two) just before his feet crossed the line.

“And that’s what happened basically. He passed it to me and I took my shot.”

“I’d rather be lucky than good,” head coach Tim Miles said. “We knew (Illinois) was going to press, which is why I called the timeout early, because I didn’t think we’d get it advanced very far…James is the kind of guy that practices that shot every day, so we’ll take it.”

While the final shot was a beautiful moment, the other 39:58 of the game had plenty of ugly ones.

“We just fouled too much,” Miles said, “because they played harder than we did in transition, with their cuts in their half-court offense and on the offensive glass. Finally, I think we got them slowed up a little bit with the 1-3-1, but at the same time, I think you to credit them for hanging in there, because they didn’t have a great night shooting either.”

“Hectic, but chaotic kind of,” sophomore guard Isaiah Roby said, when asked to describe the game. “That’s how (Illinois) likes to play, so we kind of played into their hands a little bit about it. It’s a win, so that’s the ultimate thing.”

Roby, who got his first start of the season in place of Jordy Tshimanga, finished with nine points and ten rebounds.

The Illini (10-9, 0-6 Big Ten) are still the only team in their conference to not have a win in league play. All nine of their losses have come by ten points or less this season.

“Nothing is given,” Illinois head coach Brad Underwood said. “Everything is earned. Give Palmer credit. Made a heck of a shot. We felt pretty good, watching him come up the floor and we took about six seconds in the backcourt, and the kid just stepped in and made a shot over Trent (Frazier).

“We’ve lost three overtime games, and now a buzzer beater. We’re not playing, nor are we acting like a team that is winless.”

Meanwhile, Nebraska escaped heartbreak for the second straight game and earned some much-needed momentum before a critical tilt against No. 23 Michigan at home on Thursday.

“I think the guys were just really disappointed about the way they played against Penn State,” Miles said. “The could have, should have, would have part of it. So, I think they just wanted to come out and play better and get a ‘W’ and if we make our layups, just our bunnies, it’s probably an 8-10 point (lead) late in the game, but we just have to toughen up some.

Nebraska was just 5/23 from three-point range and missed twelve two-point baskets, but the hero of the night still got well-deserved recognition.

“I’m very happy for James,” Miles said. “I thought that he bounced back in a big way. He and I had a good talk about, ‘James, I believe in you, I know you’re a go-to guy.’ I stuck with him when he was falling down tonight, but James can make plays and that’s always valuable and I thought he was really good tonight.”

Palmer, after only five points on 1/9 shooting at Penn State Friday, finished with a game-high 24 points.

“I take him out of the starting lineup, and that means something to Evan,” Miles said. “As a guy who doesn’t score a lot but does a lot of the dirty work for the team, you appreciate starting a little more than the rest of the guys.

“He was in the gym the last two days working hard, and to see him come out and play really sharp, I was thankful and we were lucky to have him, because he made a lot of good, good plays. Winning plays.”

Nebraska takes on Michigan at Pinnacle Bank Arena on Thursday evening at 8 p.m. The game will be televised on the Big Ten Network.

The Wolverines are the only team the Huskers have yet to beat since joining the Big Ten.