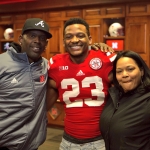 Former Ole Miss linebacker Breon Dixon formally announced on Sunday that he intends to transfer and enroll at Nebraska.

Dixon, a four-star prospect out of Grayson High School in Suwanee GA, had offers from over 20 schools. Dixon played some this past season as a freshman, but the two-year bowl ban inflicted on Ole Miss due to NCAA violations caused Dixon to look elsewhere.

Dixon took a visit to Nebraska this past weekend.

Dixon is pretty versatile on the field. He can line up as an outside linebacker, nickel back, or safety. Dixon can enroll and begin classes at UNL on Tuesday. It’s also possible that Dixon could receive a waiver from the NCAA, which would make him immediately eligible for 2018.

Either way, Dixon has three seasons of eligibility left.