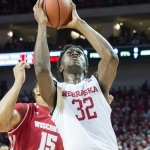 Sophomore center Jordy Tshimanga, who has started every game for Nebraska up to this point, did not make the trip to Penn State, and his status with the team going forward is currently up in the air.

The current speculation is that Tshimanga intends to transfer, but there is no confirmation of that intent at this time.

Sources say Nebraska’s coaching staff will meet with Tshimanga and his family when they get back to Lincoln to further discuss the situation. Tshimanga had nine points and six rebounds against Wisconsin in Nebraska’s 63-59 win on Tuesday.

Nebraska head coach Tim Miles recruited Tshimanga for two years out of the MacDuffie School in Granby, Massachusetts. He picked Nebraska over UNLV and Minnesota.

Tshimanga averaged five points and four rebounds during the 2016-17 season. He came on late last season, averaging 7.4 points and 5.9 rebounds in the last 11 games.

Tshimanga underwent a minor cleanup knee surgery during the fall, and has since struggled to find the consistency he showed on the floor late last season.