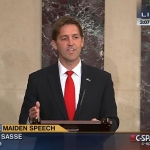 Nebraska U.S. Senator Ben Sasse says he fears Russia is just getting started and the hacks, forgeries, influence campaigns are going to get more and more sophisticated. His comments follow a cybersecurity firm’s report that Russia hackers are targeting the Senate.

A cybersecurity firm says the same Russian government-aligned hackers who penetrated the Democratic Party have spent the past few months laying the groundwork for an espionage campaign against the U.S. Senate.

The revelation suggests the group is still busy trying to gather the emails of America’s political elite.
Senator Sasse says that the Administration needs to take urgent action to ensure that our adversaries cannot undermine the framework of our political debates. Sasse adds that the Attorney General should come back to Congress and explain what steps he’s taken since last year.