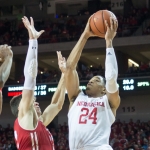 Nebraska has played three Friday games so far this season during the non-conference schedule, and won them all.

“The Friday game is really unique,” head coach Tim Miles said. “I don’t know if I’ve had one of those since my Division II days. At the same time, we’re excited to go out. Penn State’s one of those teams that was predicted to be strong. They’ve been really good, and they’ve had some tough times, and it’ll be a good road test for us to see and gauge our advancement and see how we’re doing as a team.”

Sophomore center Jordy Tshimanga, who has started every game for Nebraska up to this point, did not make the trip to Penn State, and his status with the team going forward is currently up in the air.

The current speculation is that Tshimanga intends to transfer, but there is no confirmation of that intent at this time.

Sources say Nebraska’s coaching staff will meet with Tshimanga and his family when they get back to Lincoln to further discuss the situation. Tshimanga had nine points and six rebounds against Wisconsin in Nebraska’s 63-59 win on Tuesday.

The news about Tshimanga didn’t come out until after Miles addressed the media on Thursday afternoon, so there was no comment on the situation.

With or without their starting big man, Nebraska needs to be ready to slow down sophomore guard Tony Carr (18.9 ppg, 2nd B1G) and sophomore forward/center Mike Watkins (9.6 rpg, 2nd B1G).

“Tony is a terrific player,” Miles said. “Big, strong guard. He’s got a huge potential. Mike Watkins at the center spot…I think be blocked eight of our shots in the Big Ten tournament.”

Watkins did in fact block eight Nebraska shots in the Nittany Lions’ 76-67 overtime win against the Huskers in the first round of the Big Ten tournament on March 8, 2017.

The Nittany Lions return four starters from a team that finished 15-18. Their five starters are averaging at least 10 points per game. Sophomore forward Lamar Stevens has also been solid, averaging 15.3 points and 6.7 rebounds per game.

Penn State’s home arena, the Bryce Jordan Center, holds over 15,000 people, but the Nittany Lions only average 5,633 spectators per home game, which ranks 12th in the Big Ten.

“It’s a larger facility, Miles said. “They don’t quite draw as well, so it’s a little quieter. Big, spacious empty spots where noise goes to die, so you have to bring your own energy. Your team has to be talking to each other.”