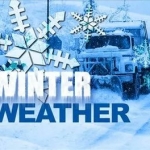 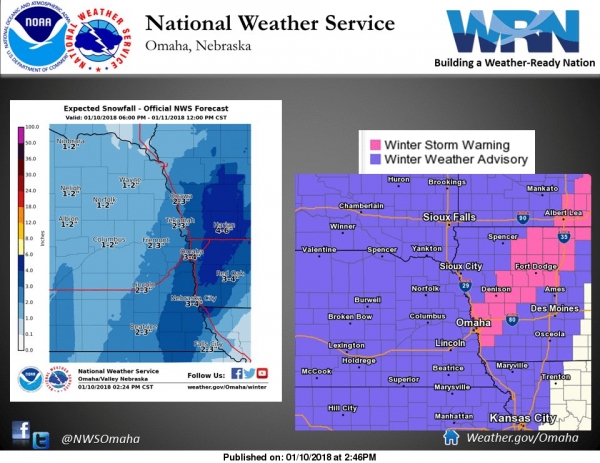 The first significant winter weather event has arrived in Lincoln and all of eastern Nebraska early Thursday morning, making travel difficult for the morning commute.

A Winter Weather Advisory is in effect for Lancaster County and the surrounding area until 6 p.m. Thursday.

A cold front swept across southeast Nebraska late Wednesday night, dropping to temperatures into the teens by early Thursday morning. Precipitation overnight Wednesday was very light, with only a trace of snow reported in Lincoln.

There is a light glaze of ice in some areas with some freezing drizzle falling before the snow.

Lincoln is expected to receive around an inch or two of snow, with heavier amounts expected to the southeast, near the Missouri River and into southwest Iowa.

Southeast Nebraska and southwest Iowa are expected to see around 2-5 inches.

In addition to snow, strong northwest winds between 25-30 mph with gusts around 40 mph are expected, causing blowing snow and reduced visibilities. This could also drop wind chills to near 15 below zero.

Lincoln’s Public Works and Utilities said in a press release that 20 crews will begin spreading salt and brine on all emergency snow routes, arterials, bus and school routes on Thursday morning.

As of 7 a.m. Thursday, Lincoln Police reported only one accident in the city of Lincoln. Conditions on Interstate 80 between Lincoln and Omaha have deteriorated on Thursday morning, with snow completely covering the road between Mahoney State Park and Omaha.

Drivers are urged to use caution during the morning commute on Thursday. A complete list of school, business and road closings can be found here.

Lincoln Public Schools and the University of Nebraska-Lincoln will resume classes and activities on Thursday as scheduled.

We’ll continue to update this story as necessary. If you have any closings or cancellations to pass along, you’re encouraged to send us an email to news@klin.com.