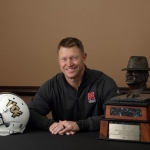 Frost is the first non-power five head coach to take home this award since Boise State’s Chris Peterson in 2009.

Frost was asked again Wednesday about his thoughts on the current College Football Playoff format. UCF was the only FBS school to finish the 2017 season undefeated, but the Golden Knights were ranked No. 12 in the final playoff poll, and finished No. 6 in the AP’s final top 25.

“If this year taught me anything it’s that with the current structure I don’t think a Group of 5 team has a chance,” Frost said. “(The CFB Playoff Committee) kept us at a comfortable distance from the Top 5 and Top 10 for a long time, even when we were undefeated. Continued move two and three loss teams ahead of us. It’s obvious to me that they don’t have that intention to have that debate. Hopefully that will change.”

Frost has said several times that he’d like to see the playoff field expanded to eight teams instead of the current four-team format.

Frost was also asked by ESPN on Wednesday about Alabama head coach Nick Saban’s decision to to bench quarterback Jalen Hurts for true freshman Tua Tagovailoa in the second half of Monday’s national championship game.

“It was a decision I don’t know I would have been courageous enough to make,” Frost said. “The other answer is that (Tua) was pretty obviously better and they had 12 games to figure it out and didn’t. Coach Saban is above criticism with everything he’s accomplished, so I don’t mean it that way, but I recruited Tua out of high school and knew what he could do and it doesn’t surprise me that he did what he did.

“Jalen’s a great player, too. That was a very bold and courageous move and I’m surprised it didn’t happen earlier (in the season).”