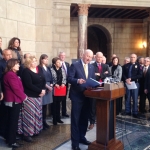 Attorney General Doug Peterson announced the initiative Thursday with dozens of state officials and advocates. The Demand an End awareness campaign seeks to clamp down on child sex trafficking by focusing on johns who purchase sex.

The Human Trafficking Initiative reports that 11 percent of the people sold for sex in Nebraska are advertised as under the age of 21.

Lawmakers and Gov. Pete Ricketts have increased penalties in recent years for sex traffickers and johns who prey on underage victims. Peterson says he wants to make clear that traffickers “are going to pay a really high price” if they get caught.