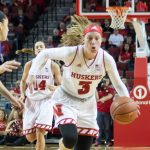 Whitish’s sixth three-pointer was the biggest. It put Nebraska ahead 77-72 with 28 seconds left.

Hannah Whitish with the clutch 👌!! pic.twitter.com/uBBhS246We

Redshirt senior guard Janay Morton also provided a spark for the Huskers with a career-high 10 points off the bench. Junior forward Maddie Simon contributed 11 points and five rebounds. Freshman Kate Cain was the fourth Husker in double figures with 10 points.

Nebraska was solid offensively, making 46.6 percent (27/58) shots from the floor, but struggled from the free throw line, making 14-of-22. The Huskers also lost the turnover battle 13-6.

Nebraska has now won seven straight games away from Lincoln, which ties for the second-longest road streak in school history.

The Huskers are back at Pinnacle Bank Arena on Saturday evening. They will host No. 23 Michigan State. Tip-off is set for 7 p.m.

Starting with Saturday’s tilt against the Wolverines, Nebraska will face a ranked opponent in four of its next five games.