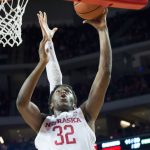 Wisconsin used scoring runs of 10-2 and 7-1 in the final 13 minutes to slice into Nebraska’s lead. The Huskers made nine of their final 12 free throws to eek out a win.

Nebraska made just two field goals in the final eight minutes, and shot just 9/23 (39.1 percent) in the entire second half.

The Huskers were also just 2/14 from three for the entire game.

“They’re a strong defensive team,” Nebraska head coach Tim Miles said. “I thought they did a good job of switching, and then I thought we made bad decisions on the switches. They had Ethan Happ out there, and the only guy that drove him hard was Thomas. Thomas Allen played a really good game. The rest of the guys settled for jumpers. We made maybe one, and missed probably six.”

While the freshman guard Allen scored eight points in 15 minutes off the bench, Palmer led the Huskers in scoring for the second straight game with 18 points. Junior forward Isaac Copeland scored 12 points and tied sophomore forward Jordy Tshimanga with a team-high six rebounds.

Tshimanga, despite fouling out with 1:18 to go, had perhaps his best game of the season so far with a season-high 9 points on 3/5 shooting.

“(Coach Miles) told me to just stay with it,” Tshimanga said, “and my teammates have been great with me, have been patient and I’ve been just getting to the gym and getting extra reps. Just working.”

The 6-foot-11 Quebec native played his best minutes in the second half, with seven of his points and five of his rebounds coming after halftime.

“I thought Jordy did a really nice job the second half,” Miles said. “He defended well, he was good for us on offense and on the glass. That was good to see. That should give him a shot of confidence.

“If we don’t have Jordy, we might not win the game.”

“First half, we did a good job (guarding Happ),” Copeland said. “Second half, he got going a little bit, but when they go through one person on almost every play, he’s going to get his baskets. So, our job is to make them as tough as we can and win the game, so we did that.”

The Badgers currently have two guards out with injury, and replaced four starters from a team that made the Sweet 16 last year. Happ, along with junior forward Khalil Iverson, are the only two players on Wisconsin’s roster that have started all 18 games this year, while Nebraska has gone with their same lineup all season.

“Right now, those younger guys aren’t quite ready to score the way (Wisconsin coach Greg Gard) needs them to,” Miles said, “and that’s probably because he’s short-handed. But, they’ll be back soon, there’s no doubt about it. I thought they did a good job later in the game of taking advantage of our small lineup. I thought (Happ) did a good job managing the game, but I don’t think our mentality is where it needed to be either.”

Nebraska lost the turnover battle 13-10, and Wisconsin outscored the Huskers in points-off-turnovers 23-11. Another sign of mental errors was the play of junior guard Glynn Watson.

Watson made 3/4 free throws in the closing seconds, but was 0/6 from the floor in 27 minutes.

“Glynn wasn’t very good defensively,” Miles said. “He wasn’t mentally strong tonight. He got beat on an easy right-hand drive and gave up a three early. I thought he did a good job, after sitting out for awhile, coming in and making some free throws when we needed him to.”

Nebraska hits the road again on Friday to take on Penn State (12-6, 2-3 Big Ten) at the Bryce Jordan Center in University Park, PA. Tip-off is set for 6 p.m. The game will be televised on the Big Ten Network.

Best seat in the house. 😅 @roby_isaiah literally went to the floor to drop this dime, and it's one of the smoothest assists you'll ever see from @HuskerHoops: pic.twitter.com/0CHxTDEcXn

Senior guard Anton Gill, who scored eight points off the bench, was the only Husker to make a three on Tuesday. Gill made two, and the second one will be remembered for awhile.

“The only (three) I can remember us making was the one where Roby’s on his keister, we miss a three, he’s there, gets a rebound and flips it back and we shoot the horse shot,” Miles said.