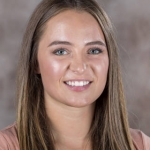 A Prospect, OH native, Atherton played in 20 matches during the Huskers’ 2017 NCAA Championship season. She played the first two matches of her career at the season-opening VERT Challenge while filling in for an injured Kelly Hunter. Atherton logged a career-high 47 assists against Oregon in a 3-1 loss.

“I really love our team, and they are an amazing group of individuals. I will miss them more than anything,” Atherton said. “I have made some of my best friends at Nebraska and I will forever be grateful for that. I also want to thank our fans for their support. Being able to experience this has been life changing, and I want to thank all the fans for everything they do for the program.”

“I want to thank Hunter for her contributions to our team this season, which included setting two very tough matches in her first-career college action to start the season for us, and also playing a key role as a serving sub throughout the season, especially during big moments of the final four,” Cook said. “I wish her all the best as she moves forward in her career.”

With Hunter graduating, Nebraska will now be without both setters from the 2017 team as they begin their title defense. True freshman and Knoxville, TN native Nicklin Hames, the nation’s top setter recruit for this fall according to PrepVolleyball.com, is the only setter currently expected to be on NU’s roster for next season.

Cook still has time to add a transfer in at setter who’d be eligible to play at the start of the 2018 season. The most recent player to do this was Mary Pollmiller, who transferred in from Tennessee in 2013 and started two seasons.