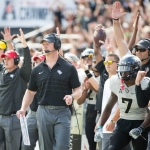 UCF athletic director Danny White strongly beliefs the Golden Knights, who finished the 2017 season at 13-0 and champions of the Peach Bowl, deserve to be called national champions.

The Knights were the only FBS team to go undefeated in the 2017 season.

“We feel strongly that our football team is a national champion,” White said on Orlando’s 96.9 The Game Wednesday. “Looking at research and what’s happened across college football through the years, there’s tons of examples where there’s a dispute on one or two or three teams, even four teams in some years some years that feel like they have claim to a national championship.

“I don’t know how you don’t call this team national champions when they went undefeated, and in the last game of the year, they beat the team that both teams competing in the (College Football Playoff) Championship.”

Alabama and Georgia will square off in the national title game on Monday night at Mercedes-Benz Stadium in Atlanta, GA; ironically the same venue where UCF beat Auburn.

On Sunday, UCF will hold a championship parade at Disney World in Orlando.

What are we going to do next? We’re going to Disney World! 🏰#ChargeOn pic.twitter.com/15rJTZ8NdF

Since UCF has claimed themselves as the national champion, Scott Frosts’ assistants received $300,000 bonus for winning the national title. They also received bonuses for the following achievements:

Frost himself did not receive a bonus for the “national title.” He already exceeded his bonus cap of $250,000 by getting UCF to the AAC title game, winning the conference championship, and beating Auburn in the Peach Bowl.

Frost said after UCF’s win over the Tigers that the Knights didn’t get enough respect from the College Football Playoff Committee.

“It looked like a conscious effort to me to make sure that (the committee) didn’t have a problem if they put (UCF) too high and a couple teams ahead of us lost and, ‘Oh, no, now we have to put them in a playoff,'” Frost said. “But we just beat a team that beat two playoff teams and lost to (Clemson) by six points, and we beat (Auburn) by seven.”