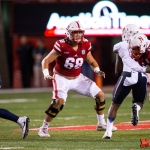 Nick Gates, Nebraska’s starting left tackle who just finished his junior year, has decided to forego his senior year and enter the 2018 NFL Draft, according to a statement on his Twitter page early Tuesday morning.

Gates was a three-year starter, making 26 consecutive starts at the left tackle position. The Las Vegas native was a third-team All-Big Ten selection in 2016 and was on the watch list for the Outland Trophy before the 2017 season began.

Gates came to Nebraska in 2014 and redshirted that year before becoming a regular starter in 2015. He started ten games in ’15 at right tackle, and started all 13 games at left tackle in 2016.

Gates and junior left guard Jerald Foster were the only two offensive linemen to start every game of 2017. Gates is the second Husker to declare for the draft this offseason.

Quarterback Tanner Lee announced his decision to enter the 2018 NFL Draft on Dec. 28.